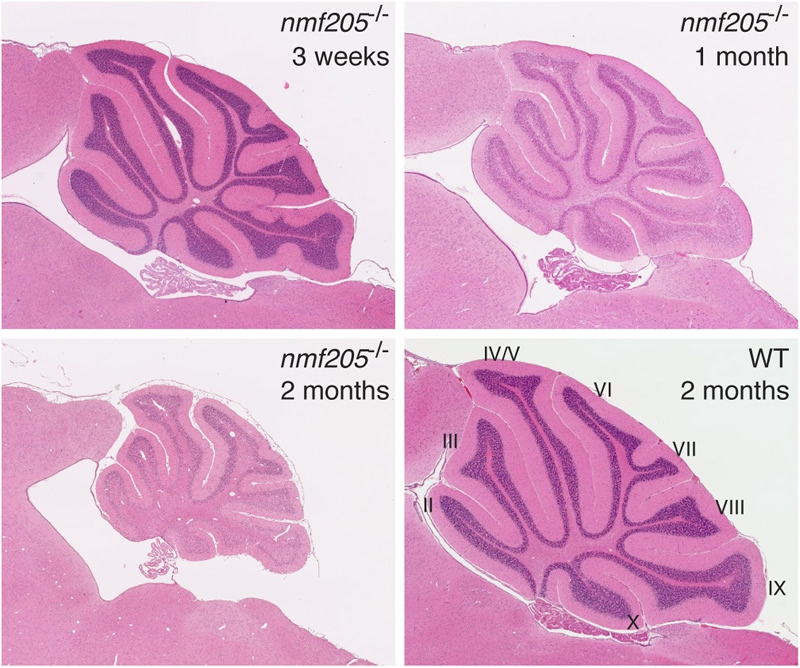 The speed of translation across a transcript can vary and contribute to correct folding of the nascent peptide. Our work has demonstrated that prolonged pauses of ribosomes during translation elongation can be detrimental for neuronal fitness.  Cerebellar, hippocampal, cortical, and retinal neurons degenerate in mice homozygous for the ENU-induced mutation nmf205. We determined that these mice have a null mutation in the gene encoding GTPBP2, a novel translational GTPase.

Ribosome stalling induces neurodegeneration.
The pool of tRNAArgUCU in the C57BL6J brain is reduced due to a mutation in these mice that disrupts processing of n-Tr20, a tRNAArgUCU expressed specifically in the CNS. This deficiency leads to an increase in ribosome pausing at AGA codons during elongation. Normally this pausing is largely resolved by GTPBP2:Pelota. However, in the absence of GTPBP2, ribosome stalling at AGA codons increases leading to neurodegeneration.
From Ishimura, R. et al. 2014 Science 345:455–459. © 2014 American Association for the Advancement of Science.

The neurodegeneration associated with loss of Gtpbp2 function varies tremendously depending on genetic background, suggesting the presence of genes that modify this phenotype. By positional cloning, we identified a mutation in an arginine tRNA gene, n-Tr20, that results in neuron death when combined with the Gtpbp2 mutation. Surprisingly, this tRNA gene is expressed only in the nervous system. Although five tRNA genes with the same anticodon are present in the mouse genome, ribosome profiling demonstrated that loss of this isodecoder tRNA resulted in increased ribosome pausing during translation elongation when the codon complementary to the anticodon of the mutated tRNA was present in the ribosomal A site. Ribosome occupancy at this codon dramatically increased when Gtpbp2 and the tRNA gene were mutated, suggesting that GTPBP2 is a newly identified ribosome rescue factor. We are actively investigating the function of GTPBP2 and other putative ribosome quality control factors in the nervous system and searching for additional modifiers of these genes.

You can login using your social profile
Install social plugin that has it's own SHORTCODE and add it to Theme Options - Socials - 'Login via Social network' field. We recommend: Wordpress Social Login
or